We were recently contacted by Gordon Kennedy's son, Ian Kennedy, telling us of his father's upcoming 90th birthday. Gordon and his late wife,...

As the newly elected President of the BEC Cycling Club and self-proclaimed master of the Rollers, I felt it was my duty to retrieve the club rollers from the depths of storage, dust them off and organise a roller event after what seems to be a 15 year hiatus.

The Sutton & Epsom Rugby Club was picked as a venue purely because it had a bar.

We had 10 people sign in on the night which consisted of a few experienced old hands and a few first-timers, with a mix of abilities from accomplished track sprinters to good TT riders and ambitious road racers. There was no preconceived idea of who was going to be good at this.

After a period of I cant ride against him, were using the same bike; Can I use your bike?; What pedals have you got on it?; Has anyone got a pedal spanner?; Can you make the saddle lower? we were ready to start. All five races all got off to a good clean start, there were no mishaps and everyone finished within 2 seconds of each other. There were 4 riders getting under the 19 second mark, Jason Matthiae (18.34), Jake Butler (18.43), Kieran Butler (18.78) and Rob Taylor (18.97).

With handicap times calculated it was time to match people up in a head to head with the opportunity to win the scratch race. Riding off scratch, Jake Butler got his second sub 18 and the fastest time of the night of 17.65. This still wasnt good enough for the win and he finished 3 rd behind his father, Keith Butler, with a time of 18.65 (-1.10) 17.55 winning him the Scratch Race. Shaun Marlor finished in 2nd place with a time of 19.37 (-1.80) 17.57.

A great evening was had by all, and after the prize presentations it was time to descend to the bar and talk about doing it all again in October where we will hopefully get the promised Garry Beckett v Dave Sharman face off.

The results can be found here. 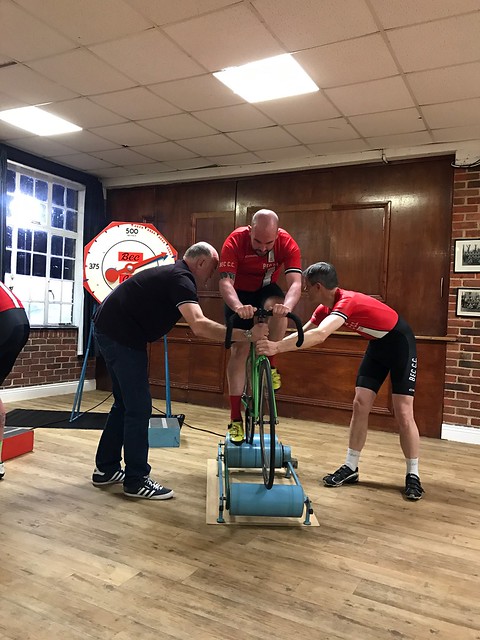